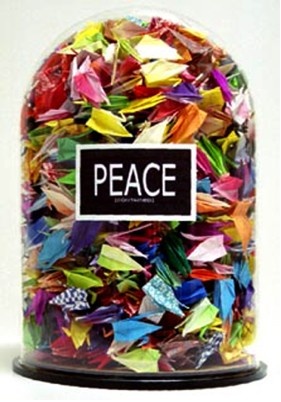 In April 2003, the mere word “peace” had become so touchy that a school in Virginia that had previously agreed to construct a banner from cranes with that word on it, declined to do so because of a parent’s complaint regarding the use of that word during a time of war. Additionally, the library at my son’s school had been displaying a strand of 1,000 in support of the school’s much touted policy of cultural diversity and global point-of-view, and in solidarity with the school staff---the majority of whom are French and were feeling overwhelmed by the anti-French sentiment in the media. Again someone complained, this time saying that the cranes posed a fire hazard to the library, a room filled with books. In both instances it was expressed that the children were disappointed by these decisions, and yet one person was capable of disrupting the atmosphere for everyone. So, after speaking with the librarian, I returned with far smaller cranes in a glass jar, thus containing their incendiary potential. The school in Virginia finally created a banner which read “hope”, and sent it to Mr. Rumsfeld at the Pentagon.