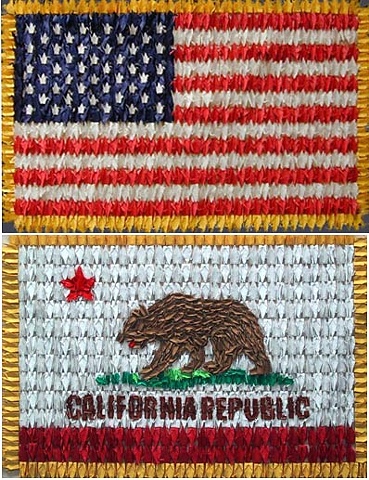 This American flag was the first composition I had ever attempted using only origami cranes. It was completed on the occasion of Martin Luther King’s birthday ’02, to celebrate that holiday as a day-on, as opposed to a day-off. At the time, flag waving was at a peak following the 9/11 attacks. While I too had succumbed to the urge to be included in this display of patriotism, I did not feel that a simple cloth flag was accurately reflecting my spirit as a peaceful American.

The California flag was both an exercise in complexity and identity, exploring origami as a medium for a painting, or mosaic, or quilt. Both flags were used during classroom workshops to encourage students to create banners of their own