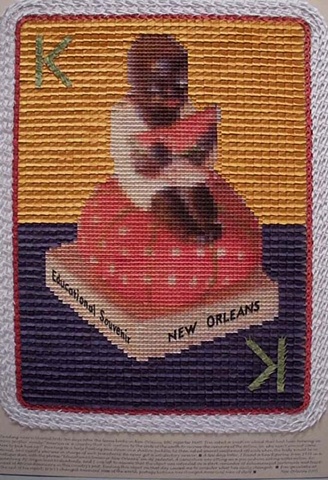 Standing near a bloated body ten days after the levees broke in New Orleans, BBC reporter Matt Frei asked a question aloud that had been brewing in many peoples’ minds: “America is a country that will venture to the ends of the earth to recover the remains of the fallen. So, why won’t you just come here to pick him up?” Pointing to the body, floating face down in a shallow puddle, he then asked several different uniformed officials when the person would be removed, and exactly who was in charge of such procedures. He never got a satisfactory answer.

A few days later, I found a tiny figurine from 1939 in an antique store with the phrase “Educational Souvenir-New Orleans” on its’ pedestal. A caricature was sitting on a pin cushion eating watermelon. Researching its’ origin was a dead-end, and I was left to assume that the object was intended as a stark reminder of dehumanized portrayals of African-Americans in this country. Finding this object on that day caused me to consider what has really changed.