Bamiyan Buddha Project
2016
I N T R O D U C T IO N &#61500; REINCARNATING THE BAMIYAN BUDDHA
The Giant Buddhas of the Bamiyan Valley in Afghanistan are a link to a time when Afghanistan was at peace with itself. In antiquity, the Bamiyan Valley was the administrative center of the Hindu Kush region and the seat of a powerful Buddhist kingdom that lasted for hundreds of years. When its peoples were neighbors to one another, and when Westerners were merely visitors with strange ways, not invading forces, peacekeepers, soldiers or policemen. A land recently ruled by a king who was a reformer, expanding education, granting rights to women and greater freedom to all. A time before Bin Laden, Mullah Omar, suicide bombers and the Taliban, ruined cities, foreign occupations and sacked cultural treasures; a time before religious intolerance. Marco Polo encountered the Buddhas as did Genghis Khan, who spared visiting his wrath upon them during his path of conquest and pillage. In 1951 a stamp was printed there to celebrate the colossi, once revered as an integral piece of its past. People on spiritual quests navigating the so called hippy trail pass through the Bamiyan Valley, following the Silk Road in search of enlightenment, peace, freedom or nirvana, as many had done for centuries preceding them. Yet despite that history, in 2001 a sequence of unfortunate decisions resulting from a volatile mix of religion and politics spelled the ruin of these statues. That March, over the course of two weeks, a hole was ripped in the continuity of Afghan culture, the world lost a heritage site and the landscape of Afghanistan was marred by this defiant and violent absence.
The Buddha Project is an act of restoration, coordinating an international crane folding effort to reincarnate the larger 175ft Bamiyan statue in quarter scale as a 45’x20’ mosaic. By using origami peace cranes to painstakingly create a mosaic on fabric, the Buddha Project will fill the void created by bomb blasts. Participants will fold cranes a using the format of a quilting bee, stimulate conversation and an international discussion The discourse will encourage the shared experiences about what we have learned since the destruction and what we are learning as part of the reconstruction of the Bamiyan Buddha both globally and locally. Where intolerance and hate destroyed the physical statues, compassion, understanding and love will resurrect a powerful symbol of them.
The project will take one year to complete and will have both constructive and educational components that participants can interact with and contribute to from anywhere in the world, including an original online knowledge game developed by Arlene Elizabeth and a downloadable JPEG for those who want to do origami. The resulting work will serve to illustrate how something seemingly insurmountable can be achieved one-step-at-a-time. The principle of this project is respect for world culture and spirituality---intentionally avoiding the polemics of politics and religion---a physical demonstration of cooperation and peace; an artistic healing process. The mosaic will be donated to Bamiyan archeological efforts that serve to support local families, who undertake such tasks. The objective of their labor coupled with this collective journey is the recovery of some of Afghanistan’s other lost treasures, slowly reestablishing the tangible cultural links to continuity that were lost when the statues were destroyed. The Buddha Project will replace those treasures with collectively created ones, and model a global process of recovery.

The following outline defines the scope of work for the Buddha Project and was originally written as a letter of inquiry to solicit an opportunity to submit a full grant request to the Creative Work Fund. Arlene Elizabeth is lead artist, and will work in collaboration with the Shambhala Meditation Center of Berkeley, a community center that has a tradition of art programs, and is looking to continue its practice of community outreach, using art as a bridge. This project has been germinating for years, but the creation of this packet coincides with the 15th anniversary of the destruction of the Buddhas and news reports about German scientists proposing to reconstruct the smaller statue from available fragments; all of which point to the timeliness of this work.

P R O J E C T D E S C R I P T I O N & GOALS
The heart of the scope of work is the creation of a 45’x 20’ origami mosaic image of the Bamiyan Buddha; a quarter scale representation of the colossal Buddha statue that was destroyed in March 2001. The traditional art forms of origami and mosaic are combined to construct a quilt-like canvas. The cultural context extends to include the traditions of religious art, political art, and community action. The resulting canvas will be installed at various outdoor locations in the United States, Europe and Asia, to increase global awareness of the loss of this World Heritage site.
To stimulate interest in the project, an online knowledge game about the Buddhas, Afghan history, and World Heritage has been developed that enables users to process ten questions relating to these subjects, with correct answers leading to a virtual reincarnation of the Buddha in a graphic representing the Bamiyan Valley.
The Buddha Project will help promote an international discussion about peace during a time and in a region of war. In collaboration with the Shambhala Meditation Center of Berkeley, folding and assembly groups will be organized, and sections of the work will be displayed. A website will be developed to educate and instruct on the process of creating the cranes to engage the participation of folding groups and will also contain a multiple choice knowledge game on the subjects of World Heritage, Afghanistan, and art history.
PREV / NEXT   6 / 43
BACK TO PORTFOLIO 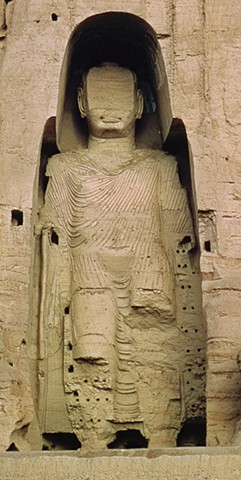