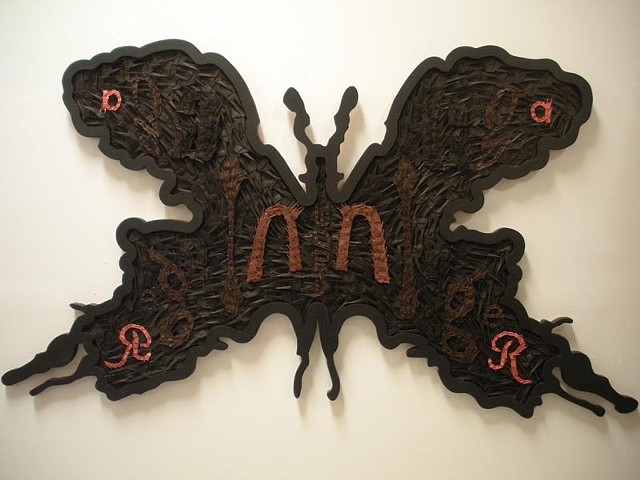 What would Oprah do?

THIS IS NOT A TEST is an exploration of a couple of loaded words that people are afraid to say aloud, yet eager to talk about if the opportunity presents itself. The work is inspired by the location of my new home, across the street from a neighbor who sits on his stairs seemingly all day long, peppering his conversation with these words dozens if not hundreds of time. Experiencing his banter and watching the Quentin Tarantino film Django Unchained caused me to and ponder these words, along with many conversations with friends and family in the wake of the film. It occurred to me that in the final analysis, black people are free to use these words because through semantic change they have acquired a level of amelioration that makes the words okay under certain circumstances. Basically, these words are defiant and liberating but only when spoken by black people because only black people can liberate themselves from words that are oppressive and hurtful to them. While there are many people who would never dream of using these words under any circumstances, we are still exposed to them as part of our culture and unprotected from the mixed emotions these words elicit.

The physical artwork began as an earth toned black butterfly because of the transformative nature of butterflies, but I was pushed into an entomological corner when asked which type of butterfly would be suitable. Wanting the conversation to be more about psychology than entomology, I incorporated the Rorschach blot #5 into the lower portion of the image then transitioned into an inkblot/butterfly inspired upper portion. The letters are arranged in a clumsy randomness to mirror the awkwardness of the words they spell out--upside-down and backwards. It is also a nod to Jean Michael Basquiat who would cross out words to emphasize them. In the center is “word” both to include “the n word” by proximity to that letter near the center, and to capture the affirmative declaration---word. The title THIS IS NOT A TEST suggests that there is no right or wrong answer. Additionally, it implies that something explosive may be about to unfold.

"We do not see things the way they are. We see them the way we are" Anais Nin Since making this work and sharing it with others, I have been both gifted and confronted with a myriad of reactions ranging from the trite---why don’t you make a white butterfly---to the absurd---do you know that nigger originally was a reference to Italians? ---to the profound---someone sharing with me a memory of the first time someone call him a nigger when he was little, then being chased down a road by his assailant (a memory he had never shared with anyone before, not even his wife). Another suggested I make a portrait of Paula Deen and hang it next to this work, as if she has become a poster-child for everyone-who-ever-used-that-word- in -contempt. Finally another asked me if I had seen The Butler as a friendly prompt for me to consider if this is an appropriate time to publicly display this art. This is a sort of “what would Oprah do” question. Is there an appropriate time to show something controversial or provocative? If appropriate timing were determined by cultural currency, prescient relevance and public discourse, the time is now. For some, there is never a good time to talk about touchy issues, except secretly and with only your closest friends or family. Yet this does nothing to “out” the skeleton in the American closet. What are your thoughts?

Tell us! I invite you to enter the confession booth I’ve constructed for this purpose. My intention is to create an anonymous space for the stories we carry, the painful emotions we bury and deny, and the clarity and power of the conversations I hope this work inspires.